From Onitsha to Silicon Valley: Teen girls’ app may save Nigerians from fake drugs

Save a Soul, a team of five students from the Regina Pacis Secondary School Onitsha in Anambra State, won a place in this year’s global finals of the Technovation Challenge in Silicon Valley, California, USA. The Technovation program mentors young girls around the globe on how to use technology to solve problems in their communities. The team, which won a place in the challenge with the idea for an app that detects fake drugs, called the FD Detector, is the only African team to participate in this year’s challenge, and competed with teams from China, Uzbekistan, Spain, Turkey and The United States in the finals. They are the first Nigerian team to participate in the junior category of the competition since its inception in 2010.

The team emerged global champions after pitching their solution at the finals which held on August 8.

A solution with unusual origins

Onitsha is probably one of the most unlikely places to expect a tech solution with the potential to transform the drug safety challenge in Nigeria to emerge from. Onitsha is much more recognized as a major commercial trading hub than a technology hub with innovators and inventors in Nigeria.

Still, considering the notoriety of the fake drugs market in Onitsha, it is probably most apt that a technological solution addressing this challenge comes from around here. Even though this team of teen girls has taken up a herculean task, the story behind how they decided to compete and emerged winners, is full of lessons, that those in charge of education in Nigeria can learn from.

The team’s mentor, Mrs. Uche Onwuamaegbu-Ugwu, said her venture into the STEM Education Program, which stands for Science, Technology, Engineering and Mathematics, happened by accident. While attending an education summit outside Nigeria, she stumbled on some STEM and Robotic models in an exhibition stand. The exhibitor’s reaction when he realized Uche knew nothing about the robotic models elicited two feelings in her. “I was angry and scared at the same time,” she admitted.

Angry about her ignorance and scared that her children and others in her community will experience the same feelings of inadequacy if nothing was done, she decided to bring the STEM materials back home. The encounter inspired her to start a social enterprise, Edufun Technik Stem Hub, where she takes STEM and Robotics education materials to different schools enabling access to students from learn about this, often from the first time. Team Save a Soul was founded in one of the schools that Uche had taken the mission.

Designing solutions from a user perspective

Counterfeit drugs, especially drugs that are in high demand like antimalarial medications, continue to be a daunting challenge for Nigeria. An N29 Billion worth of counterfeit drugs were destroyed between 2015 – 2017. Of all the drugs in circulation in Nigeria, 3.6% are estimated to be counterfeit, according to the National Agency for Food and Drug Administration and Control (NAFDAC). This extensive investigative piece concludes that it is the demand that stimulates the traffic of these pharmaceutical products.

When Onwuamaegbu-Ugwu informed the team about the opportunity to compete and obtained permission from the girls’ school to take part, she decided to commit three days a week and three hours each day to mentor them. Their first task was to come up with an idea that has a positive social impact, and this wasn’t easy. “If you are the person in my brain then, you are going to see that my brain was very hot,” says Save a Soul team member, 14-year-old Jessica Osita, explaining the extensive amount of time they put into brainstorming ideas for their Technovation application.

During this process, their mentor’s question to the team was always, “What problem do you want to solve? How many people are affected by this problem?” During their brainstorming sessions, she asked the girls to go look around the shopping mall where her office was located, observe, ask questions and see what they could come up with. That was the Eureka moment for Jessica and her teammates; Promise Nnalue, Nwabuaku Ossai, Adaeze Onuigbo, and Vivian Okoye.

Without realizing it, the team applied some elements of “Design Thinking” as described by Tom Kelly in his book, ‘The Art of Innovation’. Kelly was describing the principles behind their work at IDEO, one of Silicon Valley’s top product design firms. This is a product design method that provides solutions to problems by observing the challenges that people face on a day to day basis, iterating solutions, testing and more iterating solutions.

One problem Jessica and her team discovered from their visit to the mall was counterfeit drugs. They spoke with a pharmacist who told them about the NAFDAC Mobile Authentication Service and how it is aiding the fight against counterfeit drugs. They also learned about its shortfalls and decided to come up with something different and innovative – an App that leverages 2D barcode technology to verify drug authenticity and expiration dates. The barcode has two layers of information, one that is visible to the human eye and another that can only be read by anyone using their app. 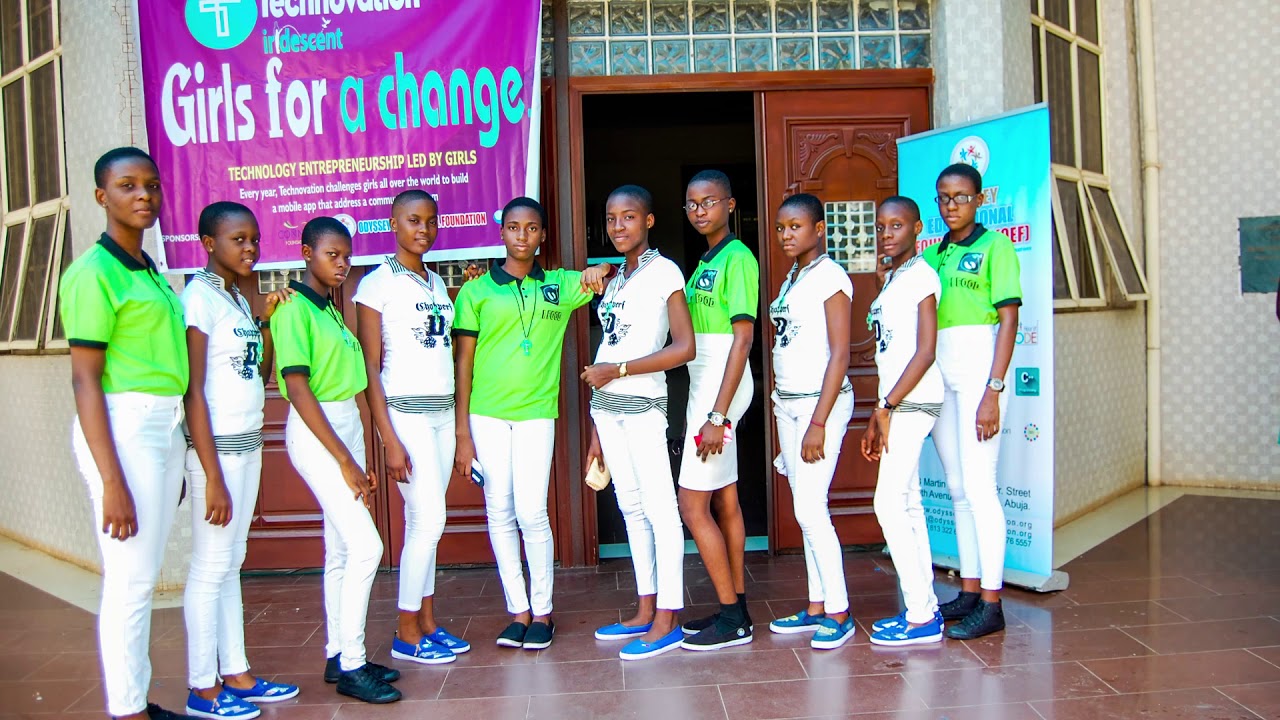 The team worked hard on designing and developing the app, as well as preparing for their pitch from January to April, and in May, they came to Abuja for the regionals and emerged winners in the junior category.

So what lies ahead for the team? It plans to market their application to big pharmaceutical companies if they can push through the design and development phase. These companies would pay to have their drugs in the FD Detector Database, while the app will be available for the public to use to verify their drugs by simply scanning in a barcode on the medicine. No added piece of equipment will be needed and no text message will need to be sent. This has the potential to empower Nigerians with the ability to check at the point of purchase if the drugs they are purchasing are genuine. If this becomes a widespread practice, it may help reduce the number of counterfeit drugs flooding the market, as demand for them is likely to reduce once people can verify that the drugs are counterfeit.

Prior to their trip for the global finals, the team received commendations from different individuals, and they benefitted immensely from their mentor’s network to support their trip. They were hosted by Anambra state Governor, His Excellency, Mr. Willie Obiano, who encouraged them to bring back the gold. They did just that on August 8th, and this earned them a congratulatory message from Nigeria’s Vice President, Prof. Yemi Osinbajo.

While we celebrate this recognition of a team who has worked hard and succeeded, an important question to ask is if we, as a society in Nigeria, are being proactive in equipping students with skills that help them compete favorably with their contemporaries in other parts of the globe.

Mr Asher Adeniyi, Managing Director of Lagos-based Poise Graduate Finishing Academy, says the development of skills in young people should be at the forefront of Africa’s development strategy. “If Africa is to really achieve its potential, then it must invest in youth capacity development programs aimed at reducing unemployment gaps and at the same time make Africa’s youths globally relevant,” he said.

Events like Technovation should be encouraged locally, especially among students, to enable them to see the skills they acquire as opportunities to solve their society’s problems. With three editions under its belt, the Health Meets Tech Hackathon organized by EpiAFRIC seeks to encourage social entrepreneurs to design solutions for health challenges in Nigeria and Africa using technology. Social innovation competitions are also gradually picking up in higher institutions with the Enactus Campus Competition, Hult Prize Campus Competition, Student Innovation Challenge and similar other initiatives. Such events expose students to knowledge and skills beyond classroom work. The 2018 World Youth Skills Day by the United Nations focused largely on innovation and emerging technologies, such as artificial intelligence (AI), and how these are transforming labor markets, as well as what skills youth need to operate in future economies and to become drivers of a sustainable future.

From innovation to utilization: Sustaining the drive

Onwuamaegbu-Ugwu said it was difficult to convince the school’s management to allow the girls attend the mentorship sessions because they didn’t understand what Technovation meant. This raises another important question- whether our educational systems are aligned with global best practices and opportunities in education. Are they leveraging these opportunities to produce students who can become global citizens and compete with students from other parts of the world?

Of interest to note is that in 2015 the World Pitch finals were won by another Nigerian team, this time in the senior category. The team of four brilliant girls from a school in Cross River State won the competition with an app designed to tackle the waste disposal challenge in Nigeria. With all the media attention the team received, it would be hoped that they have scaled the idea to a certain level with the $10,000 grant they received.

A mentor to the Cross River State 2015 champions, Grace Ihejiamaizu, said the girls were young when they won and had to go to university, so they took a break. She said they have now picked up again, despite challenges.

The 2018 Technovation Finalists traveled to Silicon Valley for the World Pitch and a week of networking, field trips, workshops, and the chance to win between $5,000 – $15,000 in scholarships. But beyond that, what happens next? And what lies ahead for Team Save-A-Soul after this brilliant win in California? Will a supportive, enabling environment be created where they can further their plans for this innovative app? While the app holds incredible promise, one potential limitation is that it is restricted currently to usage by smart-phone users with internet access.

Madhavi Bhasin, Senior Director at Iridescent, the non-profit organization that runs the Technovation Challenge, believes the challenge is only one part of the girls’ journey in STEM. “Our goal is to help educate and excite them about the possibilities they have to change the world through STEM. After participating in the

Technovation Challenge, many of the girls – about 58% – enroll in subsequent computer science courses,” she said.

Bhasin added that the girls also go on to participate in other start-up and app-building competitions and challenges, public speaking events like TEDx Women, attend hackathons and coding workshops, and even receive internships with prominent tech, education, and government organizations.

Onwuamaegbu-Ugwu says the success of the team in the regionals and now the exhilarating win while representing Nigeria and Africa in the World Pitch has convinced other girls in the school to pick an interest in STEM Education. She hopes NAFDAC, pharmaceutical companies and the private sector will be willing to partner with Team Save-A-Soul to scale their idea and says efforts such as this should not be left to fizzle out but invested in to give validation to the efforts of young people such as Team Save-A-Soul, as they work to use innovation and technology to save lives in their communities.

Do you know of students who are working on innovative healthcare solutions? Drop us a comment on Twitter @nighealthwatch and let us know!